After several weeks of soldering wires and sealing leaks, Rita and I were finally ready to get some Martian simulation going. Because the scientific process should always be transparent, here’s your personal guide to making those lovely irradiated magnetite samples you’ve always wanted.

2. Put the magnetite on the tray and place it into the transfer chamber. We created a vacuum in the chamber, then filled it with nitrogen from the glove box. We did this vacuum-and-fill process three times to make sure no external atmosphere got into the glove box when we transferred in the sample tray. This is important – it’s not a very good Mars simulation chamber if there’s a ton of Earth’s atmosphere in it. We used a glove box that looks like the one below. (Image from Wikimedia Commons.) 3. Take the samples from the transfer chamber, and put them into the simulation chamber. Using our invincibility gloves, we sealed the sample tray inside the small Mars chamber. These are the magnetite samples we used: a chunk from Greenland, a chunk with olivine inclusions, and a very fine powder.

4. Suffocate the samples. We vacuumed the chamber using first the back pump, and then the turbomolecular pump, so it’s nice and airless. We then let in 18 millibars of CO2 (a millibar is a unit of pressure – one millibar is about the pressure exerted by a penny lying flat). Remember, only the chamber that becomes a vacuum – the surrounding glove box is still filled with nitrogen.

5. Turn on the UV light. You wouldn’t bake a cake without turning on the oven, so why would you even think about doing this experiment without the radiation?

6. SCIENCE HAPPENS! We left the samples under the radiation for two weeks, checking the pressure and UV lights daily to make sure everything was working properly.

On August 11, we removed the samples to be analyzed. I know you’re dying to find out if the radiation mutated our magnetite into miniature Martians, but you’ll just have to wait for the next blog post.

About a month ago, I blasted off on the Starship Hack Circus. About fifty other people and I headed towards KOI-3284.01, and I was never to see my friends or family or Earth again. Theoretically.

Hack Circus is an English magazine and podcast about science and technology, and their Starship event coincided with the launch of their newest issue, “First Contact.” The issue is full of interesting and innovative articles — uncontacted tribes on Earth as analogous to intelligent extraterrestrials, how to knit the Arecibo message, and other cosmic quirks. Their launch event was no exception.

For three hours, I participated in an excellent example of creative science communication. Starship Hack Circus presented four experts giving short talks on space exploration and planetary science, but these were far from your traditional lectures — they formed an immersive and interactive experience.

The event wasn’t just “themed”; it took a step further, making you feel like you were on a spaceship bound for an exoplanet. By combining artistic radio technology, speculative SETI, and recordings of stellar and planetary vibrations, the talks were simultaneously informative and attention-grabbing. Audience members weren’t just spectators — we were active participants. We were encouraged to live-tweet during the event using the hashtag #StarshipHackCircus, recording our responses to science in real-time.

Starship Hack Circus was an example of the kind of cross-medium sci comm that has the potential to reach millions of people and carry us into the future of learning.  Digital media — blogs, Twitter, Massive Open Online Courses (MOOCs) — are now supplementing and complementing traditional physical media like lectures, textbooks, and papers. Live-tweeting at conferences has become increasingly popular in the last few years, allowing people to keep up with science news from anywhere in the world. We’ve come a long way from monologuing lecturers. Modern science communication is creating a well-rounded database of knowledge that’s accessible to an ever-increasing portion of humanity.

And it’s straight up exciting.

When I first saw the Mars chamber I would be working with, I felt just the tiniest sense of utter bewilderment, and possibly a hint of panic. I am not an engineer, and this thing looks mega intimidating.

Thanks to the awesome Rita Kajtar, who made major contributions to the chamber’s construction as part of her masters thesis, I began to understand its various bits and pieces. But still, I knew I’d have a hard time explaining it to you without some visuals. And so, since hands-on learning is the best learning, I made you an interactive photo! Mouseover for some enlightenment. 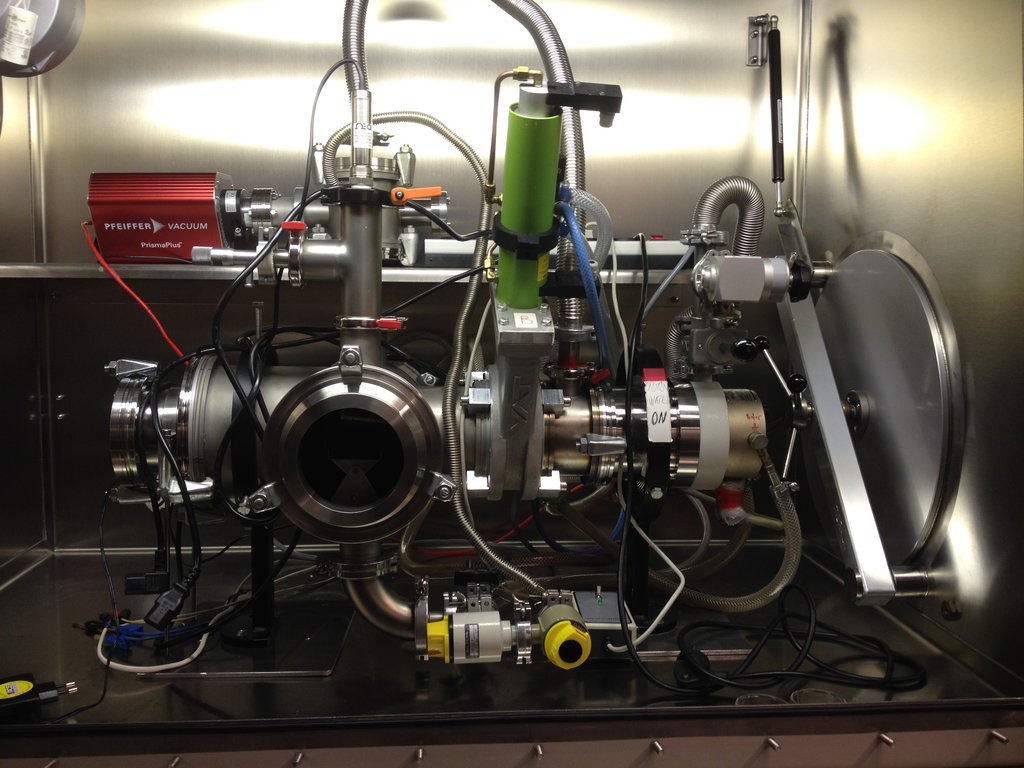 And here’s the sample tray that goes inside of the Chamber. 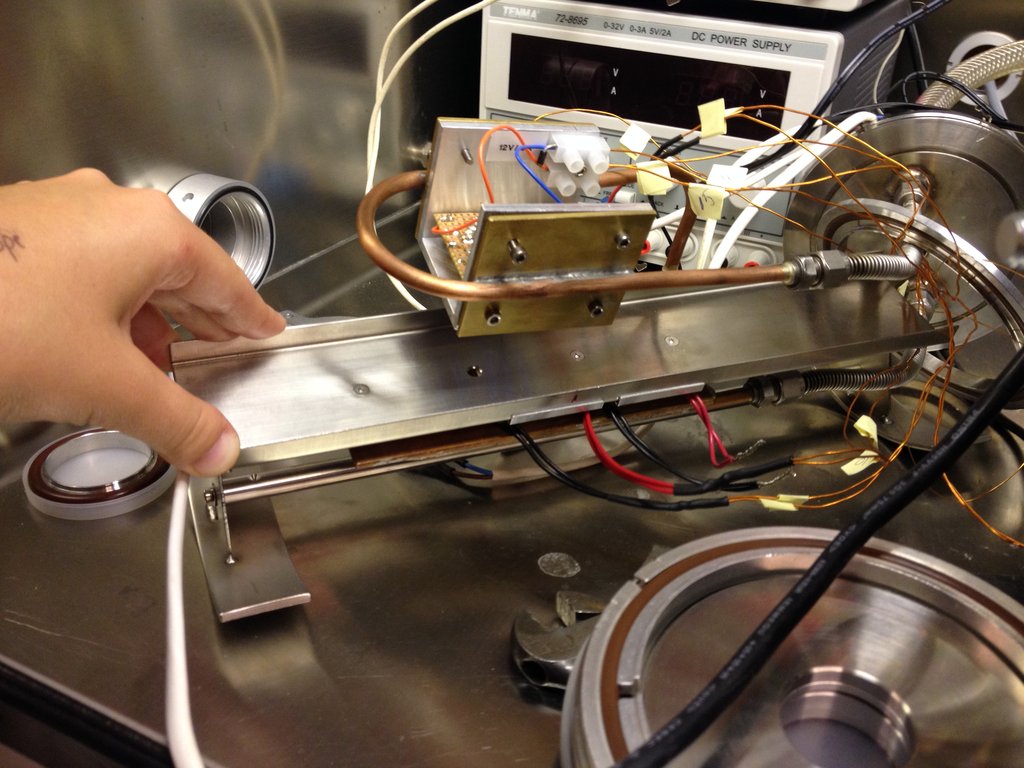 Since science and technology are ever-updating fields, there are of course a few improvements that still need to be made. For example, even though experiments are run under a near-perfect vacuum and condensation is unlikely, a humidity sensor needs to be added. And even though we can use the ideal gas law to make a rough estimate of the temperature during the experiments, it would also be helpful to have a temperature sensor.

Carl Sagan once said that if you wish to build a Mars chamber from scratch, you must first invent the universe. Ok, maybe he was talking about apple pies, but same thing. [1]

And inventing the universe is what it seems like we’ve been doing the last few weeks. “Simulating the Martian atmosphere” is a much more complex process than just throwing some CO2 into a near-vacuum.

Most of our work has been on the parts in the box below. It’s the removable sample holder, rigged up with the UV light and Peltier cooling elements to prevent overheating. Since this is where we’ll be putting the magnetite, it’s one of the most precise and crucial parts to get right.

On the experimental side of planetary science, there’s a lot that can go wrong. Patching up our beloved chamber has taken much improvisation and recycling of parts, and there are times when it feels like we’re just putting band-aids on top of band-aids. But much of the beauty in science comes from the attention to minute details to ensure that our experiment is as close of an approximation to Mars as possible. The process of rigor might be riddled with wrenches and soldering guns, but the end result is actually quite elegant.

Sometimes it seems like Mars gets all the planetary love. There are currently nine active missions orbiting or trekking along the surface of the little red planet, and more than twenty have been launched internationally since the 1960’s. But why Mars in particular? Two traits make Mars an ideal target for exploration: the science it has to offer, and the relative ease of exploration.

Mars is like a giant history book, written in the language of geology and chemistry — when we can decode what it’s saying, we peer back into the past. Signatures of a long-gone magnetic field, arid riverbeds, and frozen fields of basaltic lava hint at a world that once was. What happened to this planet that seemed to once be teeming with dynamic flows of lava and liquids? Planetary scientists are hunting for evidence to put together a picture of how an active planet can become a desolate rock. Could Earth be headed towards the same cold, dry future? By studying other planets, we’re learning more about our origins, our selves, and possibly our futures. In addition, we get some inspiration as to “habitability” — potential conditions for life to arise and thrive. And then there’s the glamorous idea that we might one day send humans to visit and perhaps colonize the red planet. But that’s a discussion for another blog post.

This is an exaggerated color photo of the Martian surface from NASA’s Mars Reconnaissance Orbiter. Credit goes to NASA/JPL-Caltech/Univ. of Arizona.

The other reason we have such a persistent interest in Mars is that it’s accessible. Jupiter and Saturn both have interesting moons of ice which probably harbor lakes and oceans, but missions to the outer planets are quite a time investment, often taking a few years to reach their targets. Venus, Earth’s other neighbor, doesn’t like visitors too much — she’s extraordinarily hostile to any sort of landing spacecraft. With a heavy lower atmosphere of sulfuric acid clouds and winds up to 220 mph, we’d be basically trying to land a rover on a surface that’s hot enough to melt lead. Though Venus may have long ago had an environment much like Earth’s, a runaway greenhouse effect [1] has led the planet to often be nicknamed “Earth’s evil twin.” Probably not a very popular destination for cute little rovers. (But hopefully we’ll send a brave one there soon.)

With NASA’s budget, it seems that Mars is an attainable goal that produces solid science. But you don’t have to go there to do Martian science — I’ve got my very own mini-Mars in the basement of the Niels Bohr Institute!

[1] The runaway greenhouse effect occurs when a planet’s atmosphere absorbs heat that the planet emits, and then radiates it back towards the surface, heating it even more. This usually happens with atmospheres that contain lots of water, carbon dioxide, and other gases that absorb and emit in similar wavelengths.

8996 kilometers across a continent and ocean. 18 hours of sunshine per day. 10 weeks. One Mars simulation chamber.

Yep, I’m back in Copenhagen. I’m working on a project with the Mars group at the Niels Bohr Institute, using a Mars simulation chamber to examine the big question: Why is the red planet red? Or, more accurately, how is the red planet red? I’ll be determining whether UV radiation can induce the oxidation of magnetite to hematite, the mineral responsible for Mars’ distinctive shade. I’m very thankful to be funded by the Monticello Foundation at Caltech.

This is my nifty version of Mars in a box.

Because I’m passionate about reaching a broad audience with my scientific endeavours, I’m starting this blog to document my science shenanigans, from mineralogy in the Mars chamber to my caffeinated attempts at learning Python. Science should be for everyone, so every week I’ll be updating you, and your grandma, and your dog, about what I’m currently working on.

But I’m no world-class researcher (yet). I just finished my third year of undergrad at Caltech, double-majoring in Planetary Science and Philosophy (you might think this is an odd combo — I’ll blog about it soon). I like philosophizing about alien life, experimenting with different genres of journalism, and hunting for the best cappuccinos in Denmark. As an exchange student in Copenhagen last fall, I fell in love with the city and decided to come back for this summer project.

As I’m trying my hand at this science communication thing, there will probably be some typos and inaccuracies throughout — remember, this is my journey through the dark forests of literature searches and experimental trial and error. Science communication is a two-way street, so interaction with you all is important — if you read something that makes no sense or is just plain wrong, write me a comment!

Brace yourselves — science is coming.